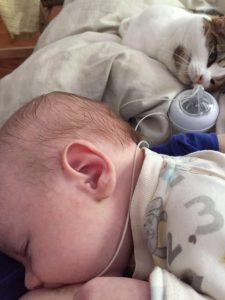 Thanks to Jaclyn Currie for this guest post. Jaclyn is a stay at home mum to a busy two year old, British expat in Nova Scotia and La Leche League leader.

We’d been trying unsuccessfully to conceive for almost two years when I was diagnosed with Hashimoto’s. I fell pregnant almost as soon as I started on thyroxine and had a very healthy pregnancy. We moved to Canada when I was around 10 weeks pregnant and there are few midwives in this province but I had excellent care from my doctors, who were very responsive to my birth wishlist! It was only towards the end of the pregnancy I found out there might be a risk of low milk supply but given that I’d planned a natural labour and delivery with a doula in the local maternity hospital, I thought I was doing everything possible to ensure baby would breastfeed well. As I was new to the country I also started attending La Leche League meetings to meet new, likeminded people.

I was referred to the post-dates clinic at 41+5 and hoped to be told all was well and to come back in a couple of days. Baby had been head down for many weeks and was moving well, but unfortunately his heart-rate was dipping dramatically and the decision was made for an emergency caeserean… then thankfully downgraded to monitoring, then induction overnight with Foley catheter, then pitocin to start in the morning.

I had a fast induced labour but managed with gas and air, lots of movement and bouncing! But he wasn’t responding well to the contractions and the decision was made to use the vacuum to help him out (avoided forceps thankfully), but I had lots of tearing and lost around 800ml of blood.

My son was born 9lb with an apgar of 9! Turns out the cord was around his neck but he found his way to my breast easily and I was relieved all was well.

Over the next couple of days I was able to express a little colostrum and the nurse said he seemed to be latching well. He was sleepy though and then had jaundice so he was put under the lights for a couple of days (this can be done in room thankfully). No real concerns around feeding though it was starting to be a little sore on one side.

Finally we got home and he fed ALL the time! I knew this was normal and made myself comfy on the sofa. My son was a happy and sweet soul. He rarely cried and the public health nurse who visited was happy to help with some positioning and tips. I mentioned it was very sore but she couldn’t see a tongue tie. She was a little concerned he didn’t seem to be having enough dirty nappies but was overall content. However between week 2-3 he didn’t gain any weight at all. Looking back at picture, he was a spindly little thing! I was reading everything I could, and had met with my LLL leader who’d suggested some bodywork to help his latch. However, nothing was helping him gain weight so with so much guilt and sadness I realised I was going to have to supplement. I wasn’t well versed in milk-sharing so formula it was (of course, I had some, thanks Nestle *eyeroll*) but I was very wary of bottle feeding him given my desire to breastfeed, and still suspected he had a tongue tie. I had a friend who’d started using an SNS system a few weeks previously (also hypothyroid!) and I asked my LLL leader if she could help me out.

It was such a learning curve, but I suppose equally so would bottle feeding. I hated giving him formula but he drank so much and immediately started gaining weight. He was thriving on every drop of milk I made, plus 8-12oz of formula a day. It was still agony, and we had him assessed at 7 weeks, with a posterior tongue tie diagnosed and revised. Thankfully around 9 weeks breastfeeding finally felt comfortable and easy, even with the tube. I very quickly gave up supplementing overnight so we could get more sleep, which he seemed fine with.

We started BLW at 6 months, which he loved but ate very little. He always preferred to breastfeed. Around 8 months it started being a battle to get the tube into his mouth, and at 9 months he would yank it out of his mouth. I decided at this point it wasn’t worth the battle for the 1-2 oz he was having so we stopped supplementing at this point. I was so worried, and his weight did fluctuate until he started properly eating good portions at mealtimes, around 15 months.

It was such a battle, and so many people didn’t “get” it; I had people laugh out loud at the tube, and wondering why I didn’t just give him a bottle… but I am sure given his tongue tie he would definitely have preferred it to my low supply boobies! He was 2 in May and still loves to breastfeed often. It brings us both a lot of peace and calm. I felt so much guilt for the longest time, but I am so glad we persevered.