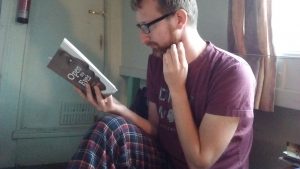 My partner Pete, reading it in a damp narrowboat in Bath, UK

Open My Eyes is the first novel from an author whose life experience has provided her with the richest material with which to craft a beautiful story. Mariam is a midwife volunteering in Addis Ababa, where she encounters both her past and her future in ways she does not expect. She finds herself fighting for the life of an abandoned premature baby, using the unconventional methods of kangaroo care and donated human milk. Meanwhile she antagonises hospital management, dates a handsome doctor, and tries to piece together a sense of her own pre-adoption world.

Alice Allan creates a real sense of the colours and dust and smells of Ethiopia, while telling the tale from multiple perspectives, so that each character’s story develops at its own pace. But this is not just a book about falling in love with a baby; we also have a mild thriller smouldering alongside Mariam’s story, although there is little for readers to figure out, and the rest of the book is so strong that this plot is not really crucial.

The biggest strength of the book is the chapters written from the baby’s perspective. I have never read prose that so powerfully captures the sensations of a newborn. If you need a way to convey the baby’s limited, terrifying world, or the importance of skin to skin and comfort, Alice Allan does this with the most poignant and effective insight. I read three pages of this book to a group of colleagues, and the effect was breathtaking.

This is a many-threaded story, and the central thread is that tiny fragile human, buffeted by the needs and the limitations of the adults in her world. It’s really wonderful to read fiction so heartfelt, so accurate, and so moving.

I’m intrigued to chat with Alice Allan for a future edition of Sprogcast (coming out on 25th April 2017), discussing both this lovely novel and her own fascinating life story.

[Disclaimer: I was sent a free preview copy of Open My Eyes. You can buy one from Pinter & Martin here, and don’t forget the 10% discount you can get by using the code SPROGCAST at the checkout.]

The Food of Love is a fun breastfeeding guide full of Kate Evan’s clever pictures and even fuller with words. I think it is aimed at mums-to-be and new mums, but I think it’s also widely enjoyed by people working with new parents.

There is a lot to like about this book. Most of the cartoons are funny (some of them are a bit judgey), and it is jammed with a huge amount of well-researched information. Evans positions herself firmly at the Attachment Parenting end of the spectrum, and is more than capable of backing up her position with evidence. Unfortunately she doesn’t, always, which relegates a lot of her bold statements to opinion. The book would be much stronger if it was better referenced.

In the early chapters, Evans covers the basics of how breastfeeding works, using cartoons to demonstrate very clearly the mechanics of breastfeeding as well as a lot of the interesting sciencey stuff about breastmilk. The section on hand expressing is excellent; the section on positioning is surprisingly prescriptive – I’m sure laid-back Kate didn’t always sit bolt upright to breastfeed.

Evans’ passion and enthusiasm for breastfeeding comes across on page after page of often rather stream-of-consciousness text, as though she has scribbled down everything she can think of about breastfeeding, and when she runs out of that she goes on to talk about parenting in general, sleep, postnatal depression, relationship stuff, and toddler discipline. It’s a really useful general parenting book in that respect and could probably reach a wider market if sold as such.

I enjoyed the lovely bit on the evolutionary context of attachment theory, again illustrated with amusing drawings. Occasionally she follows a fairly idealistic opinion section with a contrasting realistic cartoon, for example the starfish baby in the middle of the bed showing the reality of co-sleeping for many parents.

We have the obligatory dip into alternative medicine (which if it worked would be called medicine), which is a shame when she’s so clear and comprehensive on brain chemistry and other sciencey stuff. The recommendation of homeopathic belladonna as a treatment for mastitis is a highway to a breast abscess.

In summary, I loved parts of this book but not all of it. I probably would give it to a new parent, but not universally; I think some people might be more receptive to it than others. I’d love to see it repackaged as a general parenting book as it’s so good on attachment parenting. And I can strongly recommend Kate’s blog!

This week, The Guardian continues it’s one-newspaper ‘backlash’ against breastfeeding with an article from Florence Williams about The Wonder of Breasts.

Williams starts with some really interesting stuff about the changing components of breastmilk and how they act to protect and nourish the developing infant. But then halfway down she launches into a terrifying rant about how every chemical with which you have ever had contact has accumulated in your body and is poisoning your baby through your milk.

She then makes the fascinating, many-layered statement:

The breastfeeding lobby is sometimes reluctant to highlight breast-milk contamination because they don’t want women to have another excuse not to breastfeed.

From where I’m sitting in my comfy seat in the breastfeeding lobby, I am blissfully ignorant that most women want an excuse not to breastfeed. For one thing, I don’t see it as my job to gatekeep the information, just as I don’t deliberately protect women from the risks of formula feeding, on which more later. If you will forgive me for mentioning it yet again, parents need to be able to make an informed choice that suits their circumstances and their inclinations. This article undermines informed choice by scaremongering and not giving the entire picture, and it insults women who want to breastfeed, especially those who are finding it hard, or who have given up after a struggle, and did not have the luxury of needing an excuse.

I’m no chemist so I don’t have a clear answer to this, but the first thing I would want to know in order to feel fully informed is whether the chemicals found in breastmilk, at those doses, is harmful. ‘PCBs,’ she says, ‘at elevated levels […] can interfere with thyroid function.’ Are these elevated levels? I do know that the UK government monitors the chemical levels in breastmilk (purely as an environmental pollution measure) and that they are decreasing, and this is supported by this excellent article from Best For Babes.

I would also want to see a straight comparison with the chemical levels in formula milk, which for those of you who did not know is made out of cows’ milk. Cows, which arguably have a more restricted diet than humans, are also subject to environmental pollution. The nutrient balance in cows’ milk is significantly different from that in human milk and lacks many of the interesting ingredients discussed by Williams in the first part of her article.

Then I would want to consider the potential for pollution or contamination during manufacture, storage, and making up of formula milk, which in its powdered form is not sterile. And finally, I would compare the relative risk of exposure to these chemicals with the risk of not breastfeeding, for both mother and baby.

That, then, would be an informed decision.

BabyCenter has a nice Q&A on toxins in breastmilk written by former NCT Breastfeeding Counsellor Caroline Deacon; and an article published in 2008 in the journal Environmental Health gives some interesting perspective on communicating about the presence of chemical substances in breastmilk.