This Guardian article today tells you that NCT courses “can set you back by £400.”

NCT is, by the way, a charity. Not a profit-making enterprise. Surplus from courses goes into charitable work such as campaigning for better services and support for new parents, and providing that support, usually completely free of charge to parents, whether they are NCT members or not.

This page shows that NCT discounts courses by up to 90%.

None of these pages explain the level of training (minimum two years, currently a foundation degree), assessment and CPD that NCT Practitioners undertake, nor the fact that NCT Practitioners are specifically trained in facilitating adult learning (unlike most midwives). NCT courses don’t just transfer information into passive vessels, and most people come out with tools and strategies as well as knowledge. Oh, and the “bought friends,” of course.

If you’re spending that much money (or not), you might want to look into the qualifications and ethos of the organisation you are spending it with. 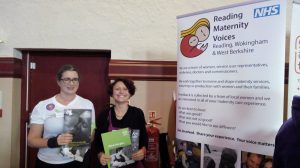 Monday It’s always an early start these days, now that my son is at secondary school and has a long walk in the mornings. I ought to appreciate the extra hour it gives me in my working day, but I’m not sure I really do. I dropped off some NCT leaflets to be added to delegate packs at the Mental Health Starts In The Womb conference I’m helping at later in the week. Then I spent two hours with my newly qualified Breastfeeding Peer Supporters, finding out what their first month of peer supporting has been like. And the evening was spent running the final session of my Essentials course with a really lovely group, who enjoyed meeting some real life new parents and their baby.

Tuesday I managed to get out for a run, which is impressive because I’m struggling to motivate myself to do that lately. A busy day at my desk with my laptop, working on various things including my presentation for the next Adult Learner study days. And another evening with an antenatal group, this time facilitating a breastfeeding session.

Wednesday In Windsor this morning for another antenatal breastfeeding session, this time with a student observer, making me highly conscious of my language! My dad called in on his way to Gatwick, and dropped off my birthday presents for later in the month, and the nicest point of the day was an hour in the pub with Pete while my son was at his karate lesson.

Thursday Slept really badly, but had to get on with things today as I’d promised to help out at the Mental Health Starts in the Womb conference. I managed the morning – checking people in, moving chairs, standing at the table giving out NCT brochures – but had to leave at lunchtime because I really couldn’t keep my eyes open. Fell asleep on the sofa.

Friday Thankfully a quiet day, empty of much ‘work’ stuff apart from cycling over to the other side of town to inspect a scout hut that we might use for NCT courses.

Saturday All day NHS antenatal course. These are once a month and seem to come round quickly. Usually an absolute blast, but I’ll be exhausted by the end of it.

Sunday Going to see Paddington II at the movies.

Earlier this year, I made the decision to stand for election as president of NCT. I’m not going to pretend this decision wasn’t nudged along by colleagues; it’s not the sort of thing you could do without a lot of conversations with people you trust. The person I trust most in the world, my partner Pete, was completely on board when I put the idea to him, and that was the final deciding factor.
END_OF_DOCUMENT_TOKEN_TO_BE_REPLACED

An NCT practitioner from Wokingham has been nominated for a national award for her dedication to supporting new parents in the community.

Breastfeeding Counsellor Karen Hall has been nominated for the ‘Behind The Scenes’ category in the NCT Stars Awards 2016, an event hosted by the UK’s largest charity for parents.
Karen won the regional award and has been shortlisted for the national NCT Stars Awards along with winners from other UK regions.

The national winners will be announced at a special celebration at City Hall, London on 2 November and hosted by NCT’s Chief Executive, Nick Wilkie.

Karen said: Like most NCT practitioners, we do a lot of unpaid work supporting local parents, which largely goes unnoticed, so it’s nice to be recognised.

Head of NCT College, Virginia Campbell said: “The energy and enthusiasm NCT practitioners provide to the many new parents who turn to NCT for support through the First 1,000 Days is remarkable. The NCT Stars Awards are a wonderful opportunity for us to say thank you to these often unsung heroes of NCT.”

If you are interested in becoming an NCT practitioner visit NCT’s website or call NCT’s enquiries line on 0300 330 0770.

I once worked in an office full of women, where there was always someone pregnant or on maternity leave. “Doing nct” was considered a rite of passage, an essential part of preparation for parenthood. So when I finally did become pregnant ten years ago, I signed up for my course and waited quite impatiently for it to start. I’m a sceptical type, and went in with some reservations, but the warm, knowledgeable, down to earth teacher really won me over and opened my eyes to a possible experience of childbirth quite different from my expectations at that point.

Although I didn’t form long term friendships with my antenatal group, they were an amazing source of support and company during the first few months. I got involved with the local branch when I spotted an advert in the newsletter asking people to train as breastfeeding counsellors. “Sure,” I thought. “I know all about breastfeeding.” Three years of training later I had a solid network of friends I made through the training: fellow trainees, local antenatal teachers, and other branch volunteers. I had also learned how little I knew about breastfeeding.

When I started the training I thought that Breastfeeding Counsellors just had a voluntary role supporting mothers, and when I found out we were expected to facilitate antenatal sessions as well, I was horrified. I don’t really speak in public, and I’m not great with strangers. At the end of my training I went out to run my first session, copious notes in hand, and at the end of it the group gave me a round of applause! I had so much fun, came home on a high, and looked forward to the next one, and the next one, and the many hundreds after that.

NCT gave me more choices in birth and parenting, and then unexpectedly gave me a new career as a BFC. I love working with parents both antenatally and postnatally, and I now have other roles supporting my colleagues, as well as related work outside NCT that would never have been possible if I’d stayed in that office. Sometimes I get downhearted when NCT gets bad press, because I know how hard practitioners work to meet the hugely diverse needs of the parents who come to our courses. And then I carry on doing the work I love, supporting every parent in the situation they are in, as our mission statement says.

Views expressed here are my own, and do not represent the views of NCT.

This weekend, Dr Ben Goldacre stood on a stage in front of hundreds of NCT Practitioners, volunteers and staff, and told us that we “push” breastfeeding. “Because you do,” he said, with a cheeky wink. “You’re the breastfeeding nazis.”

There was a sort of silent stunned gasp, followed by a burst of laughter; it was the funniest thing, a great ironic deconstruction of the name-calling rubbish (with acknowledgement to my colleague Kerry from whom I pinched that description). It was funny the second time he said it, too. After a while I was much reminded of my eight year old son and how he repeats the joke until you have to sit him down and explain that we’re really over it now.

We were treated to Goldacre’s standard comedic romp through the Daily Mail’s war on cancer, his low opinion of Gillian McKeith, and a selection of amusing headlines that can be achieved by cherry-picking statistics. Lucky us, we got a little extra bit on research statistics, and then a worked example using Brion et al’s 2011 article entitled What are the causal effects of breastfeeding on IQ, obesity and blood pressure? This study does contain flaws, and I wondered if Goldacre had also read this commentary, though on reflection if he had read it, its conclusion might have helped him to write a conclusion of his own:

Although the collective evidence suggests that breastfeeding—initiation, longer duration or exclusivity— may very well exert a modest protective effect on childhood and adolescent obesity, it no longer appears to be a major determinant. Nevertheless, because breastfeeding also reduces infection and allergy-related outcomes and probably increases IQ, World Health Organization recommendations for 6 months of exclusive breastfeeding remain a just and justifiable policy around the world.

By the umpteenth repetition of the breastfeeding nazi joke, I had the impression that Goldacre did not quite understand what NCT does, and while I have no evidence for this assertion, I’m pretty sure he hasn’t read our excellent Infant Feeding Message Framework [pdf]. Reading through the reasons women give for stopping breastfeeding, it would appear that for mothers, the evidence itself is not the highest priority when it comes to evaluating the experience, and that is where NCT comes in, to support parents in the situation they are in: non-judgemental, respectful support where support is asked for.

Ben Goldacre told us he doesn’t care about breastfeeding, he cares about misuse of evidence, and nobody in the room would have disagreed with that. But I would have liked him to have been a bit more thorough in his own research and understanding of how NCT supports parents.