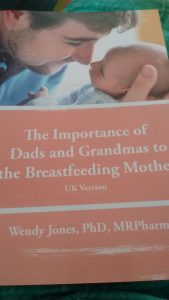 I would consider Dr Wendy Jones to be one of the most trustworthy resources on breastfeeding in the UK, particularly in her specialist area of breastfeeding and medication. This is a general book about breastfeeding, aimed at fathers and grandmothers. The dad-focus is on how to help (and a little bit of how not to) given that fathers may not fully appreciate the importance of their role to start with; and the granny-focus is on reframing some of the older generation’s expectations and preconceptions, given that they may have done things differently themselves.

Jones lays out the rationale for her advice, with a detailed explanation of what breastmilk is and how breastfeeding works. Each chapter includes a summary of take home messages, and she covers many “But what if…?” scenarios. Well-referenced, with a decent index and a list of helplines, this could be a very useful book. It’s worth pointing out that it covers formula feeding, sterilising equipment, and expressing in some detail too.

My small criticisms would be that the pictures are often small and unhelpful (although there are many good diagrams and tables of information), and being in black and white they are not at all useful for illustrating the colours of newborn poo or changes to a nipple after feeding. I disagree with Jones’ description of colic as pain/wind, when so many authoritative sources, including the NHS, define it as unexplained crying. Perhaps it is difficult to take the pharmacist hat off altogether.

Where Jones does take the pharmacist hat off, however, is in her friendly personal tone, and in the “bonus feature” of her own story about supporting her daughters with breastfeeding, which is fascinating and moving.

This is a book I will keep to hand as a good source of reliable information, and I would widely recommend it to breastfeeding supporters, and of course to Dads and Grandmas.

[Disclaimer: Wendy sent me a free review copy of her book – thank you! We had a chat with her on Sprogcast a little while ago; listen here]

1. All brands of formula are made to the same standard, so no brand is better than another. You don’t have to stick to the same brand.

2. Each brand produces several stages/types of milk. The only one suitable for a newborn baby is Stage One/First Infant Formula. This is suitable until the age of one, when your baby can have ordinary cow’s milk.

3. Formula comes in ready-made liquid form, or as a powder. The liquid is more expensive, but quicker to prepare. The powder is not sterile, so it is very important to follow the instructions for making it up, to prevent the growth of bacteria.

4. Your baby will tell you when he/she is hungry, by smacking their lips, rooting (head-turning), and sucking their fingers. Crying is a late hunger cue, so try to respond to these early cues, to minimise everyone’s distress.

5. When you bottlefeed, hold your baby close and upright, so you and your baby can make eye contact. Enjoy the opportunity for a cuddle.

6. Pace the feed: Hold the bottle close to horizontal, touch it to your baby’s lips, and allow them to latch on to the teat. When they let go of the bottle, it’s okay to offer it again, but don’t insist they finish the whole feed. Your baby can tell when he/she has had enough.

7. Newborns and breastfed babies trying bottles for the first time often prefer a slow-flowing teat. Be patient while they learn this new skill.

8. Spend as much time with your baby skin to skin as you can. This calms and soothes, and helps to build your baby’s immune system.

9. In the early days, your baby has a tiny stomach and needs small amounts of milk, very frequently. If you are able to give your baby colostrum at this time, even for a single feed, this is a very healthy start for them.

10. If you are in any way unhappy or unsure about your situation, you can talk to a Breastfeeding Counsellor. We won’t try to dissuade you from your decisions, but will listen and support you. You can call the NCT Feeding Line from 8am-midnight, every day, on 0300 3300 700.

The recent Time article has provoked quite a controversy, not least (in my opinion) the decision not to use that cover in the UK. According to The Guardian, this controversy about a photograph of a mother breastfeeding her 3 year old constitutes a ‘backlash against breastfeeding,’ and at the weekend they published Zoe Williams’ wide-ranging thoughts on this matter.

Williams’ article is littered with factual errors, assumptions, judgemental remarks, and references to ‘protests’ that never actually happened. She refers to extended breastfeeding in the first paragraph, but then goes on to discuss ‘breast is best,’ attachment parenting and government policy on health promotion, without ever coming back to her initial, rather impolite remarks that breastfeeding advocates are ‘evangelical to the point of dogmatism,’ and that she thinks we think ‘extended breastfeeders make [us] all look a bit weird,’ and that this is why we don’t discuss extended breastfeeding very much. In fact, we don’t discuss it much because it doesn’t happen much. If fewer than 2% of babies in the UK are exclusively breastfed at six months, just try and quantify the number who still get any breastmilk at all by the age of three years.

Williams goes on to dismiss the ‘benefits’ of breastfeeding as mostly syllogistic, methodologically flawed, and generally ignored by parents, while also noting that “I didn’t care whether of not the health benefits were real, I’d do it again even if it made the baby’s IQ go down,” thus negating the point of her entire argument against the ‘benefits’ of breastfeeding: like most mothers, she is not basing her decision on health or any other benefits. Mothers are biologically driven to nurture their young.

I use the term ‘benefits’ very cautiously. Breastfeeding is the baseline; it is formula milk that needs to prove its case. Research into breastfeeding may be methodologically flawed (because how can you carry out randomised controlled trials on babies?), but there is certainly no robust research showing health benefits for formula. As for the research, Analytical Armadillo has recently posted an excellent round-up of some very current research from a number of peer-reviewed journals. Williams’ guru in this matter is one Joan Wolf, who supports her view of parenting as a world of extremes, without nuance.

Moving on to attachment parenting, Williams quotes feminist criticism of co-sleeping which describes “putting the child in the bed between the father and the mother.” This is an unsafe practice, and UNICEF guidelines for safe co-sleeping can be found here. The feminist angle here seems pretty spurious, pitting notional extremes of motherhood against each other. Feminism, surely, means we all have the right to choose our own pathway?

Mothers do not divide neatly into two camps: Breastfeeding Mothers versus Formula Feeding Mothers. As Williams points out, the majority of mothers in the UK do initiate breastfeeding (though she quotes an imaginary 91%; the most recent Infant Feeding Survey gives an initiation rate of 81%). NHS South Central provides some interesting data on duration of breastfeeding; locally, we have a high initiation rate of 88%, down to 79% by five days, 72% at two weeks, and just 58% of mothers are still breastfeeding at six weeks. Therefore most of the mothers in the supposed Formula Feeding camp are mothers who have breastfed for at least some amount of time, some of whom will have made a positive decision to stop; but we know that 90% of the mothers who have stopped by six weeks would have liked to continue for longer. So it’s not the case, as William proposes, that the majority of people are not taking any notice of the public health messages about breastfeeding. In the 2005 Infant Feeding Survey, 84% of mothers said they were aware of the health benefits of breastfeeding; those who stopped before six weeks cited, in the majority, lack of support. Williams lightly dismisses the struggles and the disappointments felt by women who choose formula feeding because it’s the only choice they have.

Williams’ main premise seems to be that the government is trying to brainwash mothers into breastfeeding out of misguided social policy. She misses the point, and she misunderstands the research, but at least she gets a plug for her own book.